The Best Views of Rome 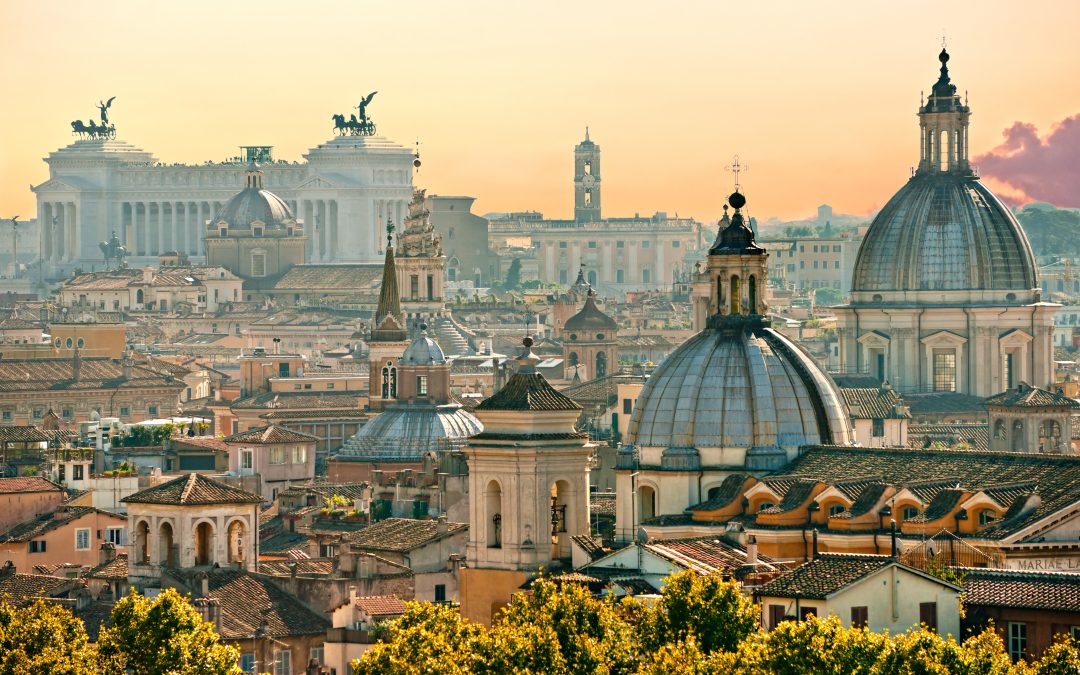 The Most Breath-taking Views of the Eternal City 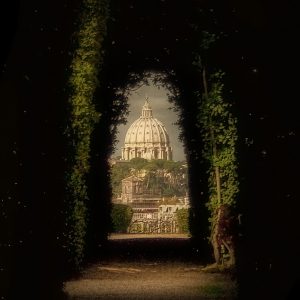 “Room with a View” or “Rome with a View”?  The similarity may be confusing, but the message remains the same: a city with a view. And it’s for this reason that we are ready to show you some of the best views in Rome. To make the most of the splendours of the city, there is nothing better, and easier, than booking one of our exclusive 15 days tour in Rome and granting yourself a romantic dinner on the panoramic terrace of the hotel that we have already selected for you.

Here is a top five list of the best  views of the city of Rome.

A Stroll on the Terrace of the Pincio 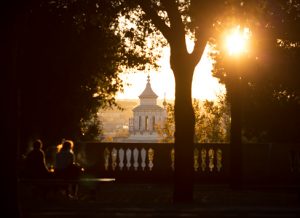 The Pincio is the belvedere overlooking Piazza del Popolo, right in the center of the city, which takes its name from the hill of the same name on which it stands. After a pleasant walk inside Villa Borghese, reaching this panoramic terrace is literally a walk in the park. You will feel like you have the city at your feet, and the view embraces the historical center, the Prati district, and  the Cupola of St. Peter’s.

Take a break from your walk and stop in the most characteristic place of the Pincio: Casina Valadier is the historic café of the Villa, an example of neoclassical architecture inspired by the example set by the French bistros. A bourgeois salon with one of the best views of the city. Even today it is the setting for important international events and hosts a one-of-a-kind restaurant, one of the best restaurants in Rome with a view. It offers not just a dinner, but a multisensory experience.

Giardino degli Aranci: the Park of the 5 Senses

Does the name Parco Savello tell you anything? This park, better known as the Garden of the Orange Trees because of its bitter orange trees whose fragrance fills the air in the summer, is one of the most romantic places in Rome. A stone’s throw from the Aventine Hill, this hidden corner of the city is visited every year by millions of tourists who come here to enjoy the panorama of the Trastevere district.

The unique visual effect that results when you walk the central avenue of the garden is something that you will understand only once you get here. The Cupola of St. Peter’s Basilica shows itself in all its grandeur and will seem very close, but when you continue towards the terrace, the Basilica will seem smaller and almost lost among the roofs of the city, in a game of perspectives that will give you one of the best postcards you’ve ever seen.

Gianicolo: a View from the Top of the Hill 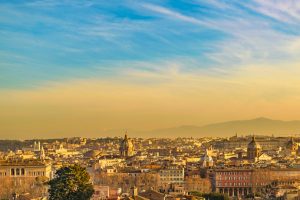 Another stop, another Roman hill. It is the Gianicolo’s turn to show off all its beauty. Our luxury 13 days tours in Rome, Sorrento and Venice are designed to offer you a complete experience in the capital. From this height, the panorama even includes the Apennine mountains far from the city, because this hill is among the highest in Rome at 88 meters above sea level. The Gianicolo is certainly one of the best views of Rome, a delight to be experienced.

There is a tradition that has remained over time only at the Gianicolo: the firing of the cannon, which Pope Pius IX established in 1847 to coordinate all the church bells of the city in unison. Since then every day at noon, except for a few periods of inactivity, soldiers fire the cannon with a blank to mark the hour. But don’t visit the Gianicolo only in the morning though, at night the view of the city lights from here is a rare sight.

If you are planning to propose to your better half, there is no better place than Monte Mario to pop the question, and the answer can only be yes.

Monte Mario is the most impressive natural elevation of the eternal city at 139 m above sea level. It is precisely here that, in 1999, one of the headquarters of the National Astronomical Observatory was built. The Zodiac’s terrace is a must-see of Rome. From this viewpoint, you can see the city spread out as far as the eye can reach. Just a step away from the stars, with the glow of the city to illuminate your walk on Viale degli Innamorati, you will share a unique emotion with whoever accompanies you on this journey. Think about it, if you’re about to make the grand gesture, Rome will earn you points!

Castel Sant’Angelo: A Window on the City 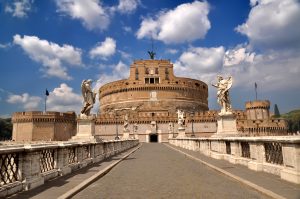 Not just hills and mountains. Does the name “Angels and Demons” remind you of anything? To us, it seems to say simply, Castel Sant’Angelo, the last stop in Rome that was chosen by Dan Brown as the backdrop to his thriller. There’s no esoteric mystery here though, only a splendid example of the passage of the eras, that has survived from the foundation of Rome to the present day. It is a majestic presence that allows the possibility of a visit inside, first to its Museum, and then to enjoy a rare rooftop view from its terraces. You will be right in the city center, but higher than everyone else, and the Rome city views from here are truly spectacular.