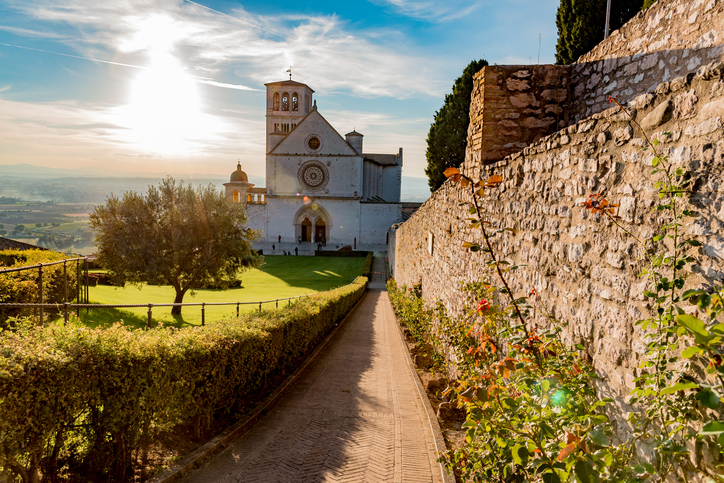 Umbria is a region in the center of the Italian peninsula  that contains a priceless treasure trove of art that is woven together with its religious history, thus creating a unique combination of nature and culture which is reflected in the best Umbrian towns . Despite its small size, it is a territory that never ceases to amaze and offers its visitors hidden and fascinating corners. Touring  Umbria means getting lost in the history of the civilizations that have left their marks on these lands, for example the Etruscans, in a uninterrupted mingling of ancient remains and artistic productions of some of the greatest Italian painters and sculptors which are  found in the many places of worship that are the riches of this region.

Visiting Umbria will take you into a world of microcosms that will fill your eyes with wonder, both by the varied nature of its countryside, among lakes, parks and waterfalls, and for its beautiful cities and villages. It is no coincidence that on the list of the most beautiful villages in Italy, Umbria boasts the highest number of entries, with 22 small villages of medieval Umbria making the grade. Get away from the overwhelming hustle and bustle of the city and enjoy being in surroundings on a more human scale in contact with a landscape of infinite beauty.

The debate between Umbria and Tuscany is never-ending because it is impossible to establish a winner. Tuscany offers vast hills and countryside, cities that are open-air museums, and centuries-old traditions. It is the cradle of the Italian language and of Dante. In Florence you can breathe art with a capital A and it would be unthinkable to come to Italy without stopping in the Tuscan capital.

Umbria is no different and responds with its own rich offerings. It embraces smaller dimensions and gives its visitors a warm welcome, making them fall in love with its lands and the products it offers. It takes you to a place where you live without looking at the clock, a place full of architectural details that are intertwined with the natural landscape. It is a land of spirituality and of silence far from the cities, and of enthusiasm for the international events that take place both in the provinces and in the urban centers. This is where the strength of this little Italian gem stands, the perfect mix of tradition and attention to modernity that generates a perfect balance.

Just think that because of the regional characteristics that are found in Tuscany, Umbria and Marche, these three regions have been mulling over the idea, for quite some time now, to create a vast “macro-region” in order to integrate local services and promote the best attractions, contributing together  to nourish the already heavy flow of visitors,  and establishing a preferential lane to easily connect the Tyrrhenian coast to the Adriatic one. Perugia, the Umbrian capital, boasts a historical center rich in history and tradition: let yourself be won over by the streets of this charming medieval town. Don’t miss the Etruscan Well and the National Gallery on your city tour, passing through the splendid Oratory of San Bernardino and the University, one of the oldest and most famous in Italy. Perugia is a lively and densely populated city, full of events and initiatives suitable for all ages.

Among the most well-known and popular festivals, without doubt  Eurochocolate is the sweetest event of them all. Every year the chocolate festival attracts thousands of visitors. After all, how can we resist the temptation? Umbria is a land where local products are the masters of gastronomy. A delight for the eyes and for the palate! Is your mouth already watering? Don’t hesitate! Book your 10 days in Italy tour of Rome, Tuscany and Umbria.

The city of Assisi is a gem of rare beauty, one of  the most renowned and visited small Italian cities, a charming village perched on top of a hill. Its fame is linked to Saint Frances, patron saint of Italy, who was born and raised in these lands. The symbol of the city is the Basilica of San Francesco and the Church of Santa Chiara. Because of  their uniqueness, everything related to the life and places frequented by the saint is included in the list of UNESCO heritage sites. It is a must to visit this place that has such a magical atmosphere.

Orvieto is inextricably linked to its main symbol , the Duomo. This masterful example of Romanesque and Gothic architecture will leave you speechless with the frescoes that enrich its walls inside and outside with the minute details of its imposing façade that stands out in the square and fills it with splendor. Here too you will be catapulted into a small village atmosphere where you can savor the peaceful life while sipping a glass of locally produced DOC wine. To visit Orvieto you just have to book your stroll through the Middle Ages with Dragonfly’s one day tours!

City and village immersed in the most evocative natural landscapes of Italy. In your tour of Umbria, you cannot miss a visit to the Cascata delle Marmore, (the Marmore Falls) set in the middle of the Umbrian nature park.

The waterfall is the result of the ingenuity of the ancient Romans: the Velino river created a stagnant and unhealthy swamp, so in 271 BC., the consul Manio Curio Dentato ordered the construction of a canal that would drain the waters towards the cliff of Marmore so that it would flow towards the Nera river.

There is a legend that tells how the waterfall was created. It speaks of a beautiful and graceful nymph, Nera, the daughter of the God Appennino, who fell in love with the young shepherd Velino. The goddess Juno, however, during a banquet learned of this wicked love and decided to punish the Nymph by taking her  to the top of Mount Vettore where the girl was transformed into a river: the river Nera. She began to flow like tears, until she came to the cliff where she had met Velino the first time. Velino, meanwhile not knowing what had happened to his beloved,  spoke to a seer who told him what had happened. At this point, Velino decided to throw himself off the cliff to be reunited with his beloved Nera. That waterfall, known today as the Cascata delle Marmore, is the symbol of their eternal love.

From the waterfall to the lake, Lake Trasimeno, the largest body of water in central Italy. In the blue heart of Umbria, a ferry ride to the three islands which stand in the middle of this vast lake is a must. If instead you only want to walk along the water’s edge then a cycle path will give you an all-round view of the lake, or you can stop in one of the many villages that hug its shores. As we said before, in the small villages between their good food and their history, the time passes with a different rhythm.

An Appointment with music: Umbria Jazz

It is one of the most famous musical events in Italy: the Umbria Jazz Festival, now in its 45th edition, an important event dedicated to the curious and lovers of jazz music. During the month of July Perugia comes alive with live performances and music, some with free entry and some without, with a rich program by national and international artists. Umbria Jazz has seen performers such as Phil Collins, Eric Clapton, Carlos Santana, Prince and other huge names in music.

The music festival winds between the Santa Giuliana Arena, in the heart of Perugia, the Teatro Pavone, the Carducci Gardens, the Santa Cecilia Oratory and various other locations vibrant with great music. The 2018 edition of Umbria Jazz has been enriched with important names in the music scene: David Byrne, the master Quincy Jones, and also Massive Attack. Real music lovers cannot miss this unique opportunity to experience incredible concerts in a charming city like Perugia.