Naples is a city that will entrance you, that will amaze you with its beauty, its mysticism and its mysteries. This city is one of the most romantic destinations to spend a honeymoon in Italy. Many couples choose Italy as their honeymoon destination, which isn’t surprising: the enchanting atmosphere is perfect for newlyweds who want to crown their love in a magical place that they will remember forever.

Naples is a timeless city, and every corner is rich with history, poetry, tradition, folktales and superstitions. But Naples is also a state of mind that will envelop you and accompany you through its narrow streets and neighborhoods.

Naples stands at the foot of Vesuvius and has always been a link between different cultures and dominated by various dynasties.It is considered the capital of Southern Italy and today holds over one million inhabitants.

There are many things to see in Naples, the narrow alleyways, palaces, museums, and neighborhoods, but let’s focus on the most romantic places in the city of Naples.

Castel dell’Ovo and the Borgo Marinari 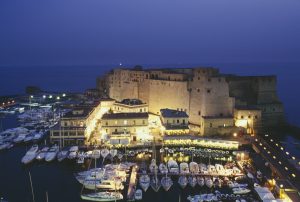 Castel dell’Ovo stands on the tiny volcanic island of Megaride, close to  Naples’ promenade. It is the most famous fortification of the city. The fort was built during the Norman period. It is a magical place, between land and sea.

One  Neapolitan legend traces the castle’s name back to the egg (uovo) that Virgil supposedly hid inside a cage in the basement of the castle. It is also said that during the reign of Queen Giovanna I, the castle was damaged and to avoid panic in the city the Queen was forced to reassure the Neapolitans by telling them that she had replaced the egg. Neapolitans are very superstitious!

Close to the fortress on the volcanic island of Megaride is the Borgo dei Marinari, a tiny village that offers couples romantic walks, especially in the evening, with the scent of the sea in the air and Castel dell’Ovo at its feet.

For those who love  panoramic views, Piazzale di San Martino, on the hill of Vomero, is a required stop.

The Neapolitan singer-songwriter Pino Daniele, in one of his songs says:

“From San Martino you can see the whole city“ 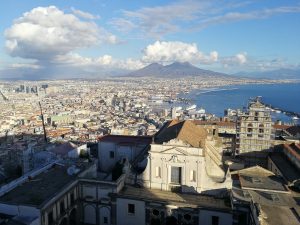 You just have to sit on a bench to admire all of Naples, from the historic center, to the bell tower of Santa Chiara, and Spaccanapoli, the road
that divides the city in two. For a more complete view you can climb the ramparts of Castel Sant’Elmo, where you can admire the entire seafront promenade, from Santa Lucia at Posillipo, along to the port, the Maschio Angioino, and Mount Vesuvius, all the way to the island of Capri.

It’s a bit of a walk because  Vomero is a hilly area, but the view does not disappoint. At sunset the atmosphere becomes irresistibly magical, and in the evening the scent of the Neapolitan cuisine will draw you into one of the many traditional restaurants in this lively area. 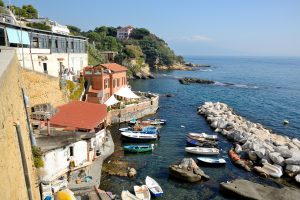 In Marechiaro, in the Posillipo neighborhood, there is a small window that looks out to the sea that is so poetic and poignant that it has inspired thoughts and dreams of love in many, including a number of  melodic Neapolitan singer-songwriters, and is considered one of the most beautiful places to visit with your beloved.

Marechiaro itself an ancient fishing village that strikes the visitor for its simple beauty. The village, in addition to offering a breathtaking view, also offers many seafood restaurants where you can enjoy excellent cuisine and admire Naples from a terrace overlooking the sea.

A charming place that offers a spectacular view, ideal for a romantic stroll. This place is able to enchant all lovers. Sunset is the best time to enjoy a few hours in Posillipo. The sea is tinged with pink, and Naples is preparing for the evening and turning on its street lights. The cuisine here is very well known, and you can find rich and flavorful specialities from both land and sea.

Enjoy your romantic honeymoon in Naples and as Stendhal writes:

“I’m leaving, I will not forget either the Via Toledo or all the other districts of Naples, in my eyes it is, without any comparison, the most beautiful city in the universe”.