5 Days in Rome: the great beauty waiting to be discovered

We could define your holiday in Rome in three words: “The Great Beauty”, and no, it’s not just the title of the film by Sorrentino, winner of the Oscar for best foreign film of 2013, but it is the wonder you will feel when the city reveals itself to your eyes. In whatever corner of the Eternal City you find yourself, you will never be disappointed. We suggest you the way to spend your best 5 days in Rome. Follow our advices and we think you can enjoy your holidays

We have prepared for you a list of the top things to do in Rome in 5 days, but we strongly advise that you start off by choosing accommodations close to the city center. “Rome wasn’t built in a day”, as the saying goes, and to enjoy all of its sights you need to manage the time you have. Choosing a hotel with a central location will allow you quick access, on foot, to the heart of the city and its major tourist attractions. 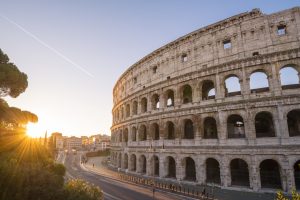 Your 5 day itinerary in Rome begins with some mandatory stops: from the Colosseum to the Imperial Forums, from the Domus Aurea to the Theater of Marcello, passing by way of the Mouth of Truth, you will already have entered the splendors of a civilization unparalleled throughout the world; you will feel a part of history.

Strolling through the characteristic cobblestone alleys of the city center, you will suddenly find yourself on one of the streets that lead to the Pantheon, once a pagan temple but now a Christian basilica. And from there, one after another, the wonders of the capital will leave you speechless. Toss a coin and make a wish at the Trevi Fountain, together with Anita Ekberg and Marcello Mastroianni, the undisputed star of “La Dolce Vita”. Every road and every stone has a story to tell, so let yourself be carried away by the desire to discover it. Let your marvellous journey begin.

The most beautiful squares

Your explorer’s nature will take you to visit the most beautiful squares of Rome, urban spaces that buzz with the frenetic pace of the city. Let yourself be enchanted by Piazza Navona: your attention will be captured by the Baroque style of the Fountain of the 4 rivers that represents the 4 corners of the Earth, created by Bernini in the seventeenth century. You could sit here for hours, basking in the magical atmosphere of the piazza. 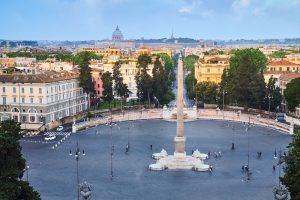 The tour continues along Via dei Condotti, one of the prime shopping streets of the city, to the crowded and lively Spanish Steps, where you can see the imposing staircase of the Trinità dei Monti, with the Fontana della Barcaccia at its feet.At a stone’s throw from here, you will find one of Rome’s 13 Egyptian obelisks, the Flaminio Obelisk, which stands proudly in the center of Piazza del Popolo, at the foot of the Pincio, which happens to be the ideal spot from which to take a photo, or three, of Rome’s panoramic skyline. 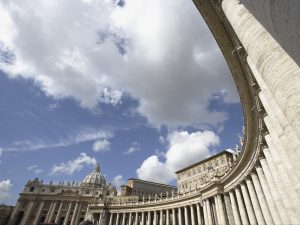 In your itinerary of the city’s piazzas  you certainly can’t miss a visit to the symbolic home of the faithful: Saint Peter’s square, a unique masterpiece surrounded by the imposing Bernini colonnade that culminates in the Basilica. With 288 columns and 140 statues, the colonnade is a rare example of proportion and architectural mastery that deserves the time it takes to visit it. Once here, a world of artistic creation opens itself to you. Do not miss the entrance to the Basilica of St.Peter’s to admire Michelangelo’s Pietà , and dedicate at least one entire morning to visit the Vatican Museums and the Sistine Chapel.

When you think you’ve already seen the best of what the city has to offer, that’s when the unexpected surprises you. Here is a quick list of places to visit:

From the Circus Maximus, ancient site of tournaments and spectacles that extends between the Aventine and the Palatine Hill, two of the seven hills of the city, you arrive at a romantic and fairy-tale place, the Orange Garden, located near the municipal rose garden, open from 21 April to 17 June.

Walk along the edge of the garden and discover a secret view of Rome from  the great priory of the Knights of Malta. Don’t  miss out on any of the city sights, and if you have followed our guidelines, you’ll have time left to go to the Coppedè district, a rare example of urban Art Nouveau in via Tagliamento, built in the early 1920’s. Piazza del Mincio and the Fontana delle Rane (The fountain of the frogs) offer a magical and dreamy atmosphere with  refined architecture that is full of details.

There are also numerous activities that light up the city at night, such as museums and archaeological sites that stay open all night on special dates during the year.

If you are lucky enough to come to Rome during this period, we strongly recommend that you take part in the nighttime screenings at the Forum of Augustus and the Forum of Caesar. Under the guidance of Italian science gurus Piero Angela and Paco Lanciano, you will begin your journey through a virtual reconstruction of the architecture and life at the time of the Roman Emperors. Put it on your agenda because it is a must-see show that you can access until November even if you travel in low season.

After all your walking you will certainly not lack an appetite. If you want to stop for a break, the trattorias and restaurants of the Trastevere district will welcome you into a Rome that was once just neighborhoods, rowdy, colorful and noisy, a Rome  of teeming city life and culinary traditions: matriciana, gricia, carbonara, oxtail and artichokes are a must to savor the true essence of Roman cuisine. On the other hand, if what you are looking for is a change from the typical vitality of the taverns, you don’t have to go far. A few miles from Rome, along the Lazio coast, you can choose to dine by the sea, and delight your palate with seafood specialties.

How much does it cost to visit Rome?

At the end of our virtual itinerary you’re probably wondering how much a 5 day trip to Rome would cost, and if you would really be able to see as much as possible of the city. Rome has a thousand faces, and if you want to see them all simply get in touch with us to find out more about our proposal, and enjoy your 5 day tour in Rome.